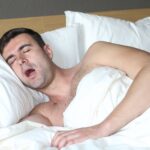 The relationship between erectile dysfunction and sleep apnea is one that has generated much interest in recent years. This blog post will explore the link between the two.

What is Sleep Apnea?

Sleep apnea is a serious condition and sleep disorder that causes people to stop breathing while they are asleep. It can be treated, but if left untreated, can gravely affect one’s quality of life and cause severe health problems.

Sleep apnea is more common in men than women and is more likely to occur in people over the age of forty-five. As men get older, the muscles in their throat relax and it becomes easier for food and debris to fall down and cause an obstruction in their upper airway. This makes it more likely that they will stop breathing while they are asleep.

Sleep apnea is also sometimes caused by abnormal tissue growth in the mouth and throat area or due to problems with the size of the nose or mouth, large tonsils, a large tongue, alcohol use, and smoking. This condition also doesn’t just result in poor sleep, complications of sleep apnea include fatigue, high blood pressure, heart disease, diabetes, stroke, et al

Most of the time, men are not aware of having sleep apnea until they have a heart attack, their physician recommends treatment for high blood pressure or diabetes, or they undergo tests to monitor the heart or lungs.

Treatment that’s available for this condition includes CPAP therapy. CPAP is short for continuous positive airway pressure. For this treatment, a CPAP machine helps move the airway into place so that it does not close during sleep. For more information on treatment options for sleep apnea, seek medical advice from your doctor.

The Link Between Sleep Apnea And Erectile Dysfunction

Sleep disorders affect a slew of aspects of one’s life and sexual function is not an exception. For someone with ED, a sleep disorder can definitely contribute to their urological or sexual dysfunction. ED can be a result of a variety of sleep disorders, there is evidence of as much.

In addition, disturbed and insufficient sleep can result in an increase in stress hormones which can directly affect things like testosterone level too. So if that’s an issue you have and you also have sleep apnea, getting treatment for that will also result in normal testosterone levels.

Moreover, the connection between sleep apnea and erectile dysfunction is gaining attention as more and more research is being done. Recently, several studies have called for further investigation into this link in order to see if there are any additional benefits for patients with either of the conditions.

A past article on a correlation has been found between erectile dysfunction and sleep apnea—also known as Sleep-Disordered Breathing (SDB)—by Urology Today states:

“Since the majority of physicians who treat ED are unlikely to have expertise in SDB, and similarly those who treat SDB generally have little expertise in diagnosing or treating ED, it is the opinion of the authors that the potential impact each of these conditions may have on the other has been greatly underestimated. This review article attempts to alert physicians of the interaction between two apparently different disorders and give a more unified approach of ED and SDB.”

Vasculogenic, neurogenic, hormonal, and psychogenic pathways, as well as the effects of drugs and other factors, play important roles in the development of ED and recent studies suggest that ED as a result of sleep apnea might involve the nitric oxide synthase and phosphodiesterase- mediated pathways targeted by tadalafil and other similar products.

Going forward, it’s theorized that the treatment of SDB might also aid in the reversal of erectile dysfunction.

More recent studies conclude “a 95% confidence interval of 0.18–0.71, indicating that in patients without OSA (obstructive sleep apnea), the risk of ED is significantly lower compared with patients with OSA. The available evidence shows that OSA is associated with a higher risk of ED”.*